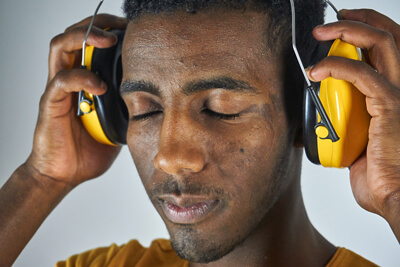 Diagnostic audiological evaluations for children and adults commonly include:

This hearing test uses sounds of specific frequencies and intensity levels to determine what a person can hear in each ear. The sounds are heard through headphones, and the patient is asked to identify each sound and the ear in which it was heard. The sounds become fainter and fainter, ultimately determining the lowest level at which a patient can hear. An audiogram may also include speech in the form of two-syllable words to determine how well a patient can comprehend what is being heard.

A modified version of the diagnostic audiogram, play audiometry is sometimes used when working with preschool and younger school-age children. The sounds are heard through headphones, but rather than raising a hand to indicate hearing a sound, the child places a toy in a container.

This form of testing examines and diagnoses problems in the middle ear by varying air pressure in the ear canal to see how the ear responds. A probe is inserted into the ear to change the air pressure, produce a tone and measure the responses. The patient may not speak, move or swallow during the test because doing so can affect ear pressure. Tympanometry measures the functionality of the eardrum (tympanic membrane). Abnormal findings may be the result of fluid in the middle ear, a perforated ear drum or impacted ear wax.

The acoustic reflex (AR) or the reflexive contraction of the middle ear muscles in responses to sound stimulation has a long history of clinical use for the identifying middle ear, cochlear and VIIIth-nerve disorders. "Acoustic Reflex tests" provide information for the differential diagnosis of hearing loss. The results can provide and/or confirm information about the type (conductive, sensory, or neural) and degree of hearing loss. "Reflex Decay tests" can be useful in detecting and/or confirming retrocochlear pathology in patients. Generally, patients who present with typical retrocochlear indicators or symptoms (such as unilateral tinnitus, asymmetrical hearing loss, and/or dizziness/vertigo) are warranted a referral to an ENT Specialist without needing to do this test. However, the Reflex Decay test may be useful when the audiogram and case history are normal, but the reflex results indicate a retrocochlear pattern.

The Acoustic Reflex tests are painless and are performed by putting a small probe into the ear canal and presenting a loud tone. The stapedial muscle will contract in response to the tone and the reflex is measured on a computer. About 5% of the adult population will have absent acoustic reflexes.

Normal Eustachian tube function is necessary for maintaining healthy middle ear conditions. Eustachian tube dysfunction may occur when the mucosal lining of the tube is swollen, or does not open or close normally. If the Eustachian tube is not functioning normally, symptoms such as muffled hearing, ear pain, tinnitus (ringing of the ears), reduced hearing, a sensation of fullness in the ear or problems with balance may occur. The Eustachian Tube Function test is a tympanometric pressure swallow test that assesses ET function behind an intact tympanic membrane (ear drum).

This test is painless and performed by obtaining a baseline tympanogram and then mechanically creating positive and negative air pressures by having the patient swallow or sip water.

Otoacoustic emissions testing (OAE) measures response to a sound from the cochlea, or the inner part of the ear. The hair cells inside the cochlea vibrate in response to sound. These vibrations produce a nearly inaudible sound that echoes back into the middle ear.

This test is performed by inserting a microphone and two speakers into the ear to emit a sound and then record the response signal. The test is often performed on children when hearing loss is a possibility. An OAE may also be conducted as part of the newborn hearing screening process. Absent or very soft response signals may be a sign of hearing loss, fluid behind the ears or damage to the cochlea.

Ear wax, also known as cerumen, is a natural substance produced by glands in the ear canal to protect the eardrum from damage and infections. Ear wax normally accumulates and then dries up and falls out of the ear canal. It functions to rid the ear of dust particles and other irritants and repel water, which may contain bacteria and can cause infections. Without ear wax, the ears would be dry, itchy and unprotected. Symptoms of ear wax blockages may include dizziness, partial hearing loss, earache, a feeling of the ear being plugged or full and ringing in the ear.

While many people think the best way of managing ear wax buildup is to clean the wax out with a cotton swab, doing so may cause further damage by pushing the wax further into the ear canal. For most patients, over-the-counter ear drops will be sufficient to clear the ear wax buildup. However, if a patient has a significant amount of wax blocking the ear canal, the excess wax will need to be safely removed by a trained professional. The removal process may involve either irrigation with a warm water solution or suction treatments that make use of miniature instruments to draw the wax out.